Footbag is a growing sport, originating in North America, though the sport is now played all over the world. Frequently referred to as “Hacky Sack®” (the registered trademark for a product manufactured by Wham-O, Inc.), footbag has existed as a competitive sport in several forms since 1972. There are a substantial number of footbag tournaments and festivals each year.

Competitive footbag is governed by the International Footbag Players’ Association, Inc., a charitable non-profit corporation to promote footbag as an amateur competitive sport. The rules are published by the International Footbag Committee (IFC). The rule book, Rules of Footbag Sports, is available on-line and is translated (or being translated) into many popular languages.

The most popular competitive footbag sports are Footbag Net and Freestyle.

Footbag Net is a singles or doubles court game, like tennis or volleyball, where players use only their feet to kick the footbag over a five-foot-high net. The rules for doubles net are a lot like volleyball: players are allowed three kicks per side, and must alternate kicks. In singles, however, players are only allowed two kicks per side.

The footbag (which is usually a 32-panel vinyl and/or leather ball) may not contact a player’s body except below the knee.

Footbag Net combines the court strategy of tennis with the set-and-spike strategy of volleyball. Players frequently spike the footbag over the net, using either the sole of the foot, a sweeping inside kick, or an outside push. Even more remarkable than the spikes are the “digs” players use to defend against the spikes. Players also block spikes in the air with amazing foot-to-foot battles over the net.

The playing court is 20′ x 44′, divided into 4 equal serving quadrants, similar to a badminton court. Serves are cross-court, similar to tennis. Scoring is similar to volleyball; you must be serving to score. Some competitions use a pool format, where the competitors are divided into pools of four or five teams. Each pool plays “round-robin”, with the top two teams from each pool advancing to a single-elimination play-off. Games can be played to 11 or 15 points, where players must win by 2 points. Matches are usually best 2 out of 3. Most competitions use a double-elimination format, where players advance through the winner’s or loser’s bracket to quarter- and semi-finals before the final match. 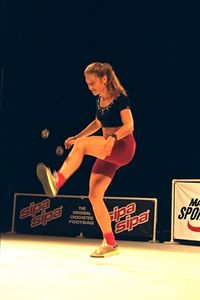 Sam Conlon at the 1996 World Championships in Montreal. Photo by Pierre Frigon.

Other forms of competitive and non-competitive freestyle exist, including “shredding” in which players attempt to perform as many tricks in a row as possible, of a given add-value or above. They also attempt to show variety in their strings, along several dimensions.

Each move or trick in freestyle footbag has a determinable difficulty rating. The difficulty of each move is added, and the total is divided by the number of attempted and competed moves in the routine to determine the average difficulty. Difficulty is measured in “adds”, which represent additional levels of difficulty beyond the basic moves. (A toe delay is one “add.”)

For variety, players must perform moves that contain elements from five general categories: (1) leg dexterity (crossing the plane of motion of the bag with a foot), (2) delays (catching the footbag on any foot or leg surface), (3) spins, fliers, paradox, and blind moves, (4) unusual surfaces (i.e., sole, shin, or head), and (5) cross-body moves (made by crossing the foot to the other side of the body before doing a delay or kick with that foot).

Execution is judged by smoothness, confidence, and, most of all, the ability of the player to keep the footbag off the ground.

There are, as you might imagine, no end to the number of ways people can have fun with a footbag. Here are just a few footbag-related games that might interest you.