These are the current rules that most player play by. The IFPA is actually in the process of formulating a more official set of rules based on the last five years of evolution of the game. Please consider the below as a guideline for now, pending a more formal set of rules in the official rule book.

The lines that separate the squares should be at least 1 inch (2,5cm) thick, and no more than 2 inches (5cm) inches thick, but it can be any convenient side (many four-square courts are drawn with street chalk).

One square is designated as the “server’s square”, or “square 4”. The rest of the squares are numbered counter-clockwise from the server’s square (3, 2, and 1). See the diagram below. 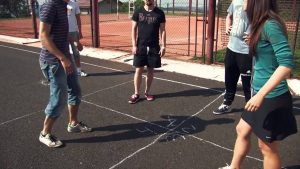 With one player in each square, play may begin by the server calling his score aloud (“0”) and then tossing the bag to any of the other three players. Each serve must be a “courtesy” toss, meaning that the server may not try to trick or take advantage of the players during the service. (There are alternative rules that allow for “trippy” serves, however, these are not allowed unless the players agree on it at some point — see below).

Players continue kicking the bag until it lands on the ground, at which point someone is OUT. (Which player is OUT is actually relatively complicated. See below for a detailed explanation.) When a given player is OUT, they move to square 1, and then all people that were in a lower number square move clockwise one square. (For example, if the player in square 3 got OUT, they would go to square 1, the player in square 1 would move to square 2, and 2 would move to 3, the server would stay.) If the game has more than 4 people playing, the players who are not in the square should form a line outside square 1 (with the line wrapping around the outside of the court counter-clockwise). Each time a player gets OUT, they move to the end of the line of waiting players, and the player waiting at the front of the line (at square 1) steps into the first square.

The object of the game is to get to the server square and stay there. Every time a player serves a round and does not get OUT, they get a point (even if they did not actually do anything to cause the other player to get OUT). Games are usually played to 15 points, but they may (by agreement) be played instead to 11, 21, or other random numbers.

(rules that cannot be changed by propositions)

We recommend starting with these rules until you get a feel for the game. These can be changed by the server through propositions.