1977 – First Experimentation of Footbag over a Net

December 1977 1st Footbag Tournament 1st Annual Hacky Sack Holiday Tournament A consecutive kick competition. During this tournament a volleyball net was available in an upper gym and the first experiment with playing over an 8 foot with 5 people on a side with maximum of 5 kicks allowed.

1978 – More experimentation with net height and number players per side

1978 No tournaments were held but some key milestones were accomplished.

At a sporting goods show in San Diego California, experimentation of playing over a 3 foot net on a tennis court occurred.

An appearance during the halftime of a Portland Trailblazer game. Demonstrated over a 8 foot high net with 3 people on a side using 5 kicks.

1981 – Several Tournaments Held Across the US

April 1983 Danish Footbag Association held the very first tournament First Danish tournament in Skelskor in Denmark on Saturday the 16. April 1983. It was also the first footbag tournament in Europe. The tournament was called “Worlds 1st Danish Hacky Sack footbag Championships” and the name of some of the hacky sack clubs who particpates was “Jumpin’ Jack Flash Hacky Sack Stars” and “Zick Zack Hacky Sack”. Net Hacky both single and doubles were played and also Hacky Golf, Long kick, Most kicks and Freestyle kicks.

Here are some of the results from the Danish Hacky Sack Jury back in 1983: 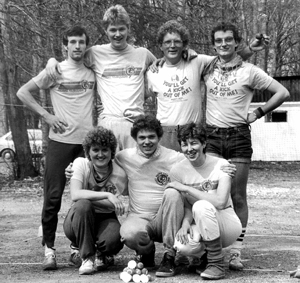 The first European Footbag Net Championships was held in August 1984 in Copenhagen at Falledparken Results:

Six teams competed in doubles net at the first edition of the French Open. 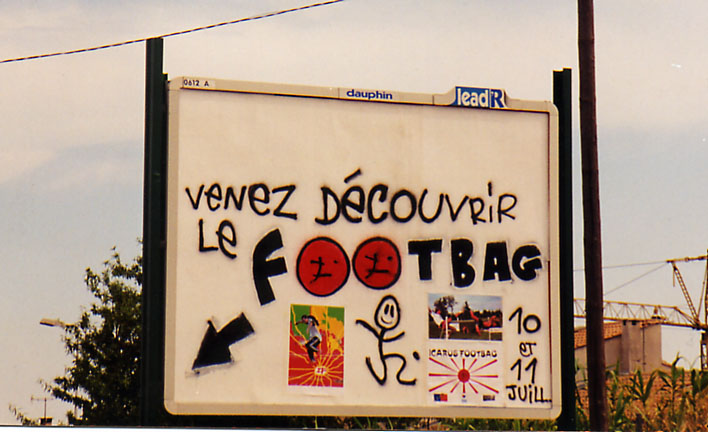