The Footbag Hall of Fameis footbag’s group of honored people that have contributed greatly to footbag’s growth since 1972, when it was first invented. Every year one person can be inducted to this elite group after being nominated. 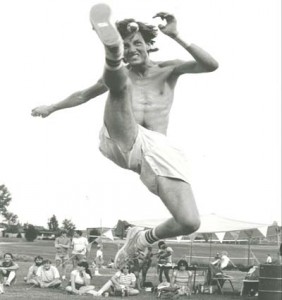 As of 2012, new members of the Footbag Hall of Fame must have a YFI that is at least 15 years from the date of nomination. In other words, members must be involved with the sport for a minimum of 15 years to be nominated. Under these criteria, 1997 would be the first year of eligibility for 2012 nominees, 1998 for 2013 nominees, etc.

Nominations should be based on leadership as displayed by an individual, based on their innovation, inspiration, promotion, sponsorship, teaching, club development, tournament organization, international sport development, and demonstration that has significantly advanced the sport worldwide, past to present.

Rita Buckley (USA) was inducteed to the HoF in 1997

Everyone is now welcome to nominate candidates for this year’s induction, if you know one or more people who started their footbag contribution in
1997 or earlier, and who meets the other criteria (described at the link below).

Please think about who you believe should be nominated, and submit your nomination by going to the nomination form which can be found on the two forum pages linked below, or at the bottom of the Hof page linked above.

Please do not reply to this e-mail, since we prefer to collect all nominations online as described in either of the forum topics below.

The forums will show who has already been nominated and their testimonials, so if you want to support an existing nomination, then we ask that you go to the nomination form and write your support there as well as on the forums.

The criteria for these nominations and induction to the Hall of Fame is located here:
http://www.footbag.org/reference/-/Hall_of_Fame_Nomination_Criteria

Thanks in advance to all of the footbag community for your continued enthusiastic support of the Footbag Hall of Fame by participating in this year’s nomination process.